The evolution of technology to extend the bounds of reality – creating a multidimensional world known as the metaverse – has experts pondering its potential benefits and drawbacks for humanity. Many predict that augmented- and mixed-reality enhancements will become more useful in our daily lives in the next 18 years than fully-immersive virtual reality. Some warn that the problems arising from today’s uses of online tools may pose even greater threats when digital life becomes even more all-encompassing.

More than 600 experts’ views of this potential future are explored in a new report by Pew Research Center and Elon University’s Imagining the Internet Center. Access the full report here.

This report is part of a long-running series about the future of digital life. It is based on a nonscientific canvassing of technology innovators, developers, business and policy leaders, researchers and activists who were asked to consider the trajectory and impact of the metaverse by 2040. In all, 624 respondents shared their views, 54% of saying they expect by 2040 the metaverse will be a much-more-refined and truly fully-immersive, well-functioning aspect of daily life for a half billion or more people globally, and 46% said that they expect that will not happen.

“Two leading themes emerged from these experts’ responses,” said Janna Quitney Anderson, professor of communications and executive director of the Imagining the Internet Center. “First, many expect full virtual reality (VR) to remain primarily a niche space for gaming and entertainment – that it will not be as well-developed and broadly embraced in people’s daily lives by 2040 as augmented-reality (AR) tools that people can simply and easily use to create information layers in the real world.

“And second, a notable share warned that extended reality (XR) tools could dramatically magnify every human trait and tendency – both the bad and the good. They said current problems with social media could be magnified, especially if the development of XR is led by the mega-tech companies that own and operate most of the most-visited public spaces on the Web today. They also worry about the ability of those in control of these digital systems to shape what people do and stifle their ability to self-actualize through the exercise of their own free will,” Anderson said. 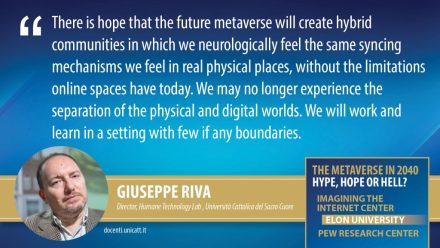 Experts in this report were invited to detail their views about both the positive and negative aspects of the metaverse.

The key themes are outlined in the following three tables. 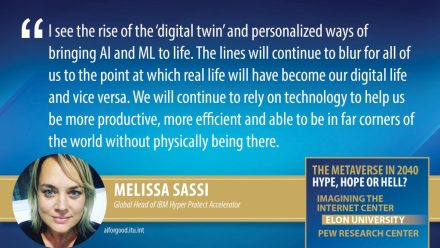 Two overarching insights about the future of the metaverse

These themes anchored many experts’ predictions as they considered the metaverse in 2040:

Half of the expert respondents to this canvassing said extended-reality (XR) applications and the networking needed to facilitate their broad adoption will advance significantly by 2040. They expect that extended reality will be much more sophisticated by then due to these factors: 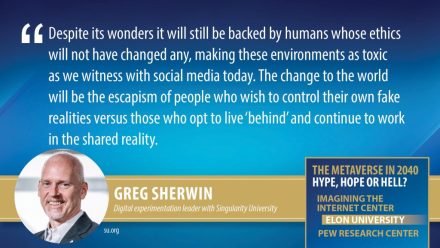 About half of the expert respondents said advances in full-immersion XR settings will not come to widespread use in people’s daily lives by 2040. They made these arguments:

Among the most intriguing predictions from those canvassed were the following:

Access the full report from Imagining the Internet or download a PDF of the report  from Pew Research.